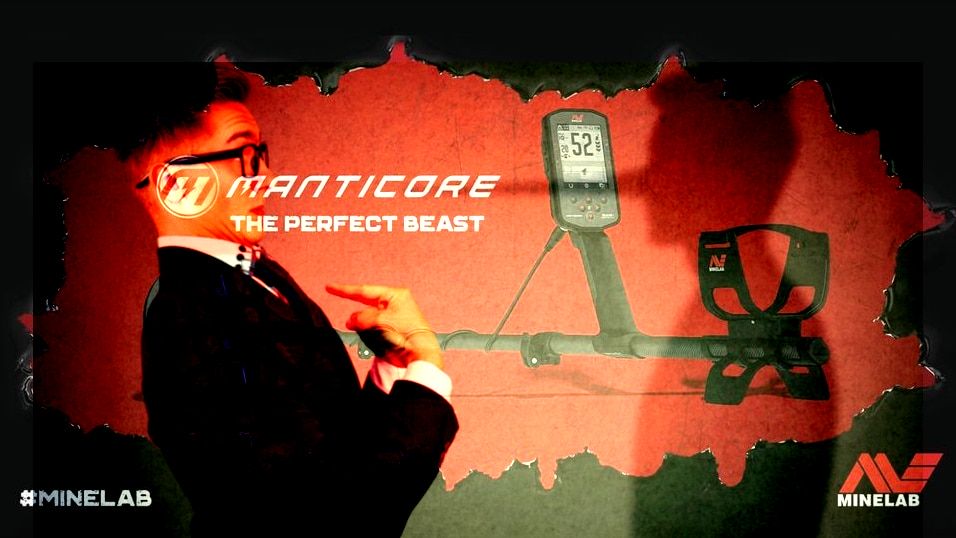 Minelab announced the birth of a new detector called Manticore some time ago. The hype is huge and the expectations are even higher. It is true that the Yankees laugh at the new name, but they raise the bar extremely high, after all, the successor of Equinox or its improved version must live up to expectations.

Well, the price of almost PLN 10,000 is a pure abstraction only for a few and I want to laugh watching on YouTube when storytellers tell how good the device will be. They probably have a hunch… or the cards say so 😉

The truth is that we know absolutely nothing and despite the numerous shows of the Minelab team traveling around Europe, we know even less … After all, the show must go on and that’s what modern marketing is all about. Announcement Announcement?! Why not … that’s what Minelab did and exactly on December 1, 2022, in a moment we will find out about another piece of news … and what!!! How to have fun! The Americans say it’s fun at the customer’s expense. We’ll see.

Everyone is excited about the new 2D system based on Target Trace known from the Minelab CTX3030 model, but this is a completely different matter and the similarity here is purely marketing. Both detectors are different technology and way of managing and displaying an ID. A new opportunity has opened up for a wide identification of iron, which is good, but how it will really work and on what basis it will turn out in the field. The ability to distinguish between large and small iron is a big plus, and the extended scale may also allow better separation of low conductors from high ones. The question is what will happen when there is a pair of them under the probe? How the software will work. Questions and more questions.

Speculation continues. Numerous Equinox experts are already making screenshots for equipment together. I will not be a hypocrite I ordered myself … I’m curious too.

Unfortunately, as in the case of XP DEUSA II, it takes a few months in the field – other tests are just dreams of storytellers who buy equipment one day to sell it the next. Best of all, they don’t put any effort into learning, they assume it’s supposed to be like that, and they borrow the detector for a day or two, so what kind of reliability are we talking about here?!

I watch numerous comparisons in laboratory conditions on the test track … and I want to laugh. People are commenting on a device they don’t know and haven’t spent several hundred hours with! They assume that the borrower has such knowledge and has set it up well, and on this basis, they make an assessment! So they don’t know the detector themselves and they can’t even set it!!! They don’t even know what function it has and how it differs from others!!! So what kind of tests and credibility or reliability are we talking about?!

In a simple way, they implement untruths, for those less grasped they have a story about numerous data in Excel tables. Spells mary grandma’s wife see you soon. It’s in its purest form treating the recipient like a moron, nothing more.

There is also a lot of repetition, I am a master, I understand this equipment, etc., I mastered it to perfection, it is to confirm the leader himself in his perfection and it is in vain to look for field tests or demonstrations and explanations of individual functions and settings. Goebbels himself said that a lie repeated many times becomes the truth. And so it is in this case.

It is a waste of time to produce fairy tales and tell nonsense that others swallow like pelicans. You have to redo it yourself to understand it, put in time and money and an infinite amount of work. Time is priceless nowadays. All the rest is an addition, on which various more or less autistic megalomania and mythomania prey… or maybe it’s Asperger transmitted by droplets? I do not know.

Below is a video that will illuminate you a bit more, still hot!